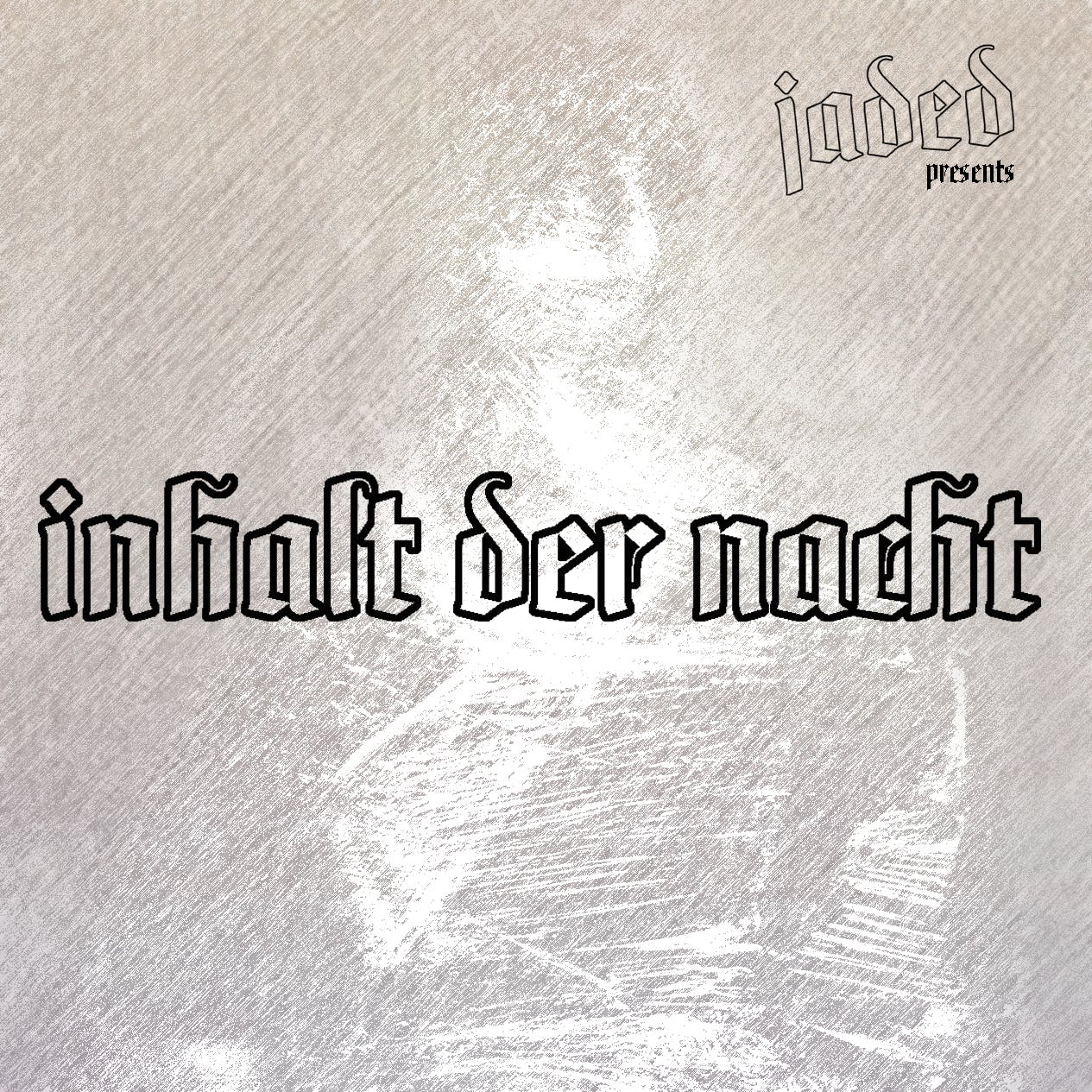 Lovers of acid, post punk, and EBM, look lively: next Sunday is for you. Jaded hosts the UK debut of Lebendig co-head, and rising star of the scene – Inhalt Der Nacht.

Hi Ceha, thank you for taking time out to chat to us ahead of your birthday celebrations and of course a very special Jaded this weekend. Lebendig has exploded onto our consciousness over the past 6 months. What have been the highlights of the journey so far, and can you tell us about the concept for the label?

Yes it’s crazy to see how fast Lebendig is growing, at first the release of my Rausch track and then fleischleben hits again in a much bigger amount… Sometimes it’s unbelievable because the label is so young, but I enjoy it so much that so many people start to love it. I think the biggest highlight for me is to see at our label nights how the people understand our vision of not being a human with any image on it and just enjoying life and of course Techno. Tooo many people try to be something that they’re not and get unhappy but it’s so easy just be yourself. And that’s also what the meaning of “Lebendig” is for us.

I think I love the label even more now that I know this! Can you share some of the tracks that have gone off at the Lebendig nights this year?

It would be fair to say that you’ve had a crazy rise yourself. Dax J seems to be a huge fan in particular, even naming you as an artist to watch alongside Tommy Holohan, Danilo Incorvaia, Cressida and Insolate. Are there any other emerging artists that you’re watching at the moment that you would like to share with us?

Hahaha yes, when I saw the DJ Mag I was like a stone because of the happiness, epic moment for me. At this point again a high five to Dax! The artists I’m watching at the moment are definitely my whole label crew, they are all really talented here are the names:

Peryl , this just 21 years old beast will be one of the best live acts in the future. He already has an unique style of music and is also an excellent buddy !

Tham , I met this dude a few years ago before he even started to make music. Now we are both residents at the Griessmuehle in Berlin and some days ago when he showed me his first own tracks I asked him to join the Lebendig family as well, full power stuff you can be excited for.

And last but not least my label partner, Echoes of October, the work with him is really easy and funny, he shares all my visions it’s always nice to make music with him and during the nights we are a perfect team because when I’m too hyperactive he comes around and is totally cool down.

The whole Jaded crew are barely containing our excitement for Sunday. What can we expect from your 3 hour closing?

Oh Krista I’m looking forward too ! I think you better take a towel to the club because it’s gonna be 3h of full power. 137bpm to 140bpm, some EBM stuff, some unreleased stuff and of course the good old school rave stuff.

We’re going to be supercharged with good vibes and ready for you! Final question – what’s next for you and for Lebendig?

The next for Lebendig will be a solo EP by Peryl, 4 wonderful tracks we can’t wait to share them with the world. They come out the Wednesday after our Jaded Sunday. The next for me is a looooong holiday trip which starts in Cuba; where I also gonna make the music for a stage play at the national theatre in Havana. That’s gonna be a crazy new experience. At the end of August, I’m coming back to reality and then there’s coming out a big Various Artist Release on a label which will be a new step for me, I’m working also on a solo EP for that one. Also, a few days ago, I finished some tracks together with my partner in crime – Echoes of October. So, for sure there will be another EP on Lebendig, and also a vinyl release on Seelen records with two original tracks and two massive remixes, so a quite crazy great year.

Thank you Ceha, until Sunday!