Double The Mayhem: Vincent Neumann vs Stephanie Sykes This Sunday.

Vincent Neumann’s notoriety has been steadily growing, in part thanks to his residency at Leipzig’s Distillery, much-discussed 10-hour closing sets in Berghain, and interesting mix titles. Fadil caught up with Vincent ahead of this Sunday’s 6-hour b2b with Stephanie Sykes. 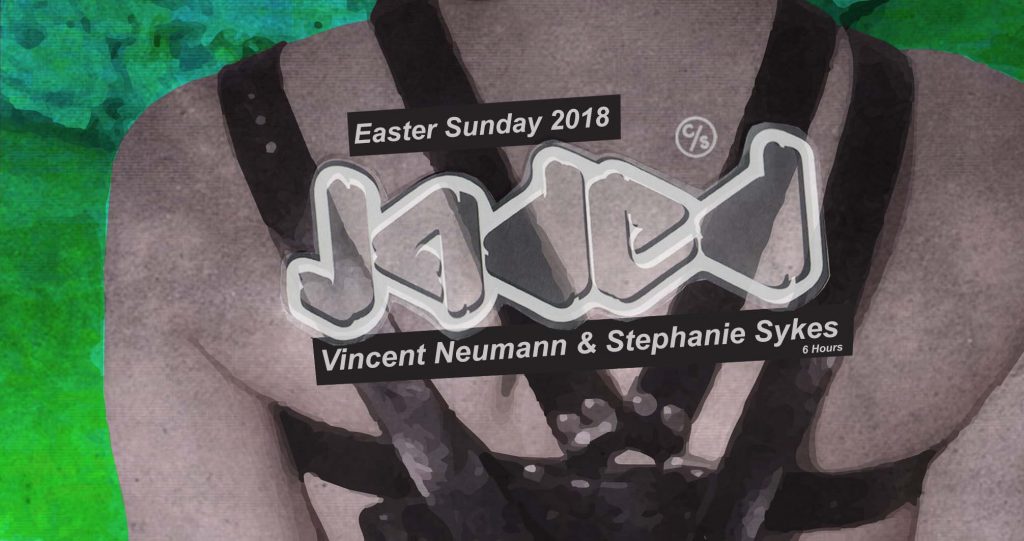 You’ve played at Jaded a number of times now, what has been your favourite moment?

My favourite moment was probably the first time I stepped into the club. Everyone was super friendly, ready to party and the room was full of energy. I immediately felt at home 🙂

How did the idea for a 6hr b2b with Stephanie Sykes come about?

I’m not really sure but I remember the first time I played Jaded Stephanie closed after me. So when she entered the booth and we briefly said hi to each other I immediately played KB Productions – Women Beat Their Men as the next track, kind of as a cheeky move. Stephanie of course immediately recognized the track (as did many other people on the floor) and was like “Yeahh!”. Afterwards we kept the idea of playing b2b floating around. Since we play a similar style (fast and funky) and get along very well and have mutual respect for each other it was a natural fit and bound to happen sooner or later.

Your 10hr closing sets in Berghain are legendary, what’s it like playing regularly in the main room for that amount of time? And how do you keep it fresh?

Oh man. I’ve been very lucky with the opportunity to play Berghain. Playing Berghain itself is the second biggest achievement in the world of techno as a dj. The only thing that tops that is playing the closing. I’ve laughed, cried, danced, jumped and sung along to tracks in the booth and had more beers in there in one closing than I drink one average per whole month. You go through so many emotions during these sets and each of the 4 closings has been totally different, but all of them very fulfilling…just closing my eyes and remembering some of those moments almost makes me shed a tear.
I try to keep it fresh by always trying to play as many tracks that I have not played there before as possible. Besides a couple of “signature” tracks of course like Thomas Hessler – Sixty Five or Nihad Tule – Mitologem…

Can you tell us about your new project with Kyle Geiger?

Kyle and me are close friends now and one day we decided to play b2b because why not? So now we have a couple of upcoming b2b shows coming up and are happy to play wherever we get booked. That’s basically it! Fun multiplies when shared 😎

What can we expect to hear from you this Sunday?

To be honest I don’t know and I kind of like that. I’m pretty sure Stephanie and I will try to one-up each other with tracks that keep the energy high while at the same time keeping it diverse, so expect double the mayhem 😎