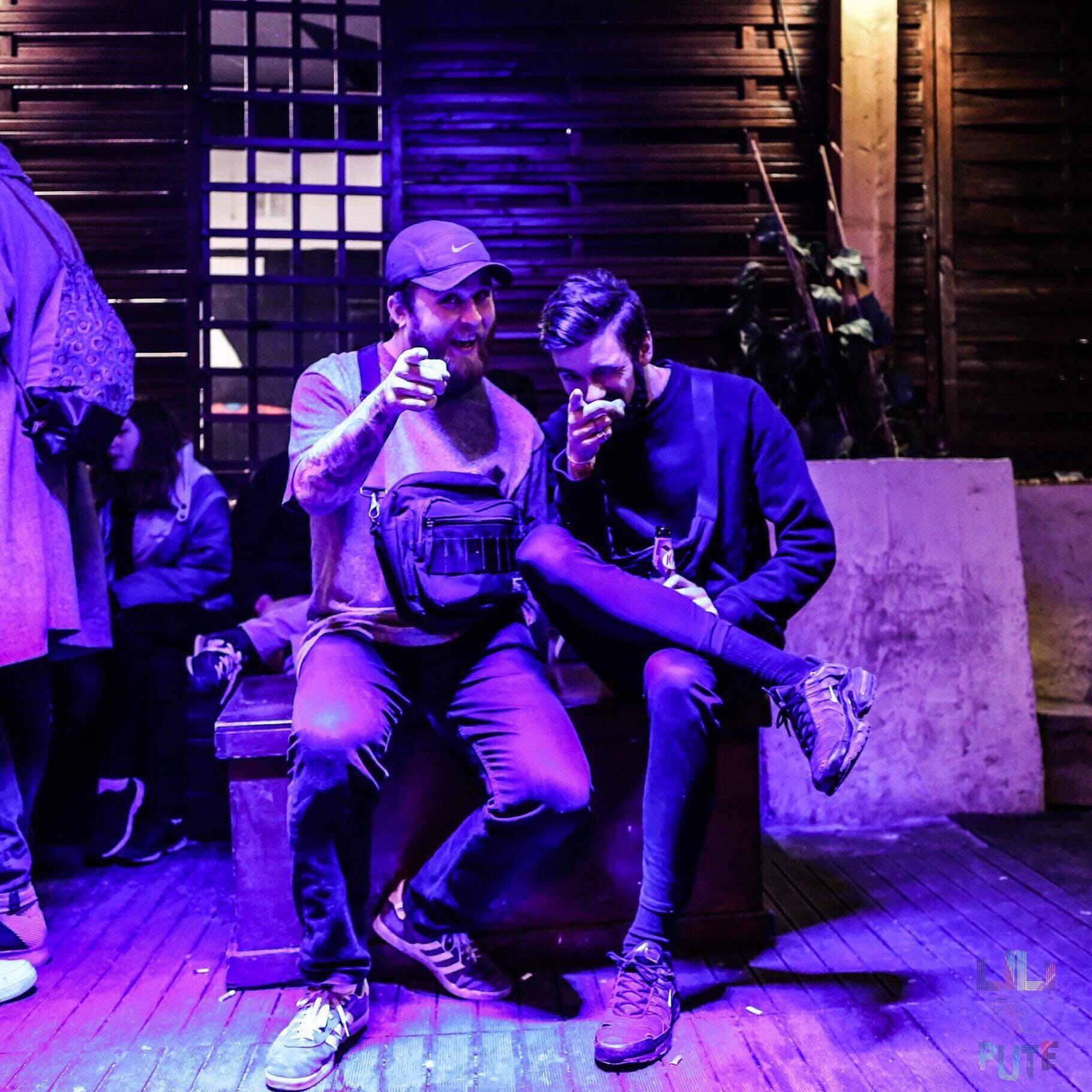 Sweedish duo Gijensu make their UK debut at Jaded on Sunday 17th June. We caught up with them to chat about the Swedish scene, sneaking into clubs, and their early influences.

So, this is the first time you’ve performed in the UK, how do you feel about this?
We are both really excited to break some new ground in Europe! Every previous gig has been in our hometown or in Paris so trying out London will be a lot of fun.

What impression do you have of Jaded, and what do you expect?
Well we only heard good things about Jaded both from people who played there and from people who just went there to party! However it’s always nervous to play a new place but we are sure it will be a lot of fun and a good chance to bring out some heavy tracks.

How did you get into electronic music, and what kind of stuff did you listen to growing up?

Oscar
Basically my dad showed me Rammstein when I was six years old which lead me on a never-ending quest to finding harder and harder music. I ended up listening to a lot of deathcore, death metal, black metal and stuff like that.

Watain
Sworn To The Dark

Getting into electronic music is such a cliché for me, but I went to Berlin for a weekend when I was 17 and managed to get into Berghain. I didn’t know what to expect there but the sound and atmosphere really got to me and when I got home a similar journey like with my previous music taste began but with techno and electronic music!

Whitechapel
This is Exile

Anton
Maybe it sounds cheesy, but I’ve fantasized about being asked this question ever since I was a teenager and started making music. I could write a book about the names that have inspired me that I want to pay tribute to, but I’ll keep it brief for this one haha… One of my first biggest influences was hands down Boys Noize. I remember scrolling through YouTube and his track “Oh!Oh!” popped up in the recommended section. It literary changed my life. I got obsessed with the sound and it became my 15-year-old-self’s only goal to recreate it. Boys Noize hauled me into a whole new world of music and even if I don’t listen to him now, his BNR label t-shirt still hangs on my wall.

I also have to give credit to my dad. He always played a bit weird and unexpected stuff at home and I still remember this time when I walked into the kitchen one morning and heard a track that blew my mind. The amount of adrenaline I got from this sound back in the day was what got me hooked on music.

You both grew up in Sweden. What’s the scene like there?

Our whole project is part of a reaction to the scene in Sweden. First of all the laws about partying and alcohol are truly fucked up here in Stockholm. Clubs even have a thing called dance permission, which is a real thing. You can actually get kicked out of a place for dancing if they don’t have this permission. On top of this, there is a major problem with cronyism in Stockholm which leads to the same people booking the same DJs weekend after weekend, which has rendered to scene to a standstill almost. However, we do see hope in some promoters and organizers trying to step outside of the box and book more diversely.

Your productions are known for their power and speed. What sounds and artists inspired you towards this type of techno?

Oscar
One of the first tracks i ever heard that i thought was really hard at the time was “Dustin Zahn – Stranger to stability (Len Faki podium mix), which I still enjoy but compared to what I listen to now It’s pretty tame haha! Anyways it really opened a door for me and I started searching for similar music. Two years later I was at one of my first real rave parties and heard a track called “Fawn – Bless” that was probably the moment I knew what type of music I wanted to listen to and produce.

Nowadays, inspiration comes from everywhere from other techno tracks to movie soundtracks. To name a few artists I would probably mention the remixers of our EP. Danilo Incorvaia is a beast when it comes to percussions and making tracks that has the same forward motion and energy like schranz but without going over the top. Tim Tama is just amazing with melodies and making beautiful atmospheres. Ayarcana really knows how to treat distortion and make dirty music that still sounds professional. Makornik has a special way of making grooves in tracks and adding small sounds that seems to only appear once in a track which make them really interesting to listen to because it always seems to come some new elements. All this is qualities that we strive for and get inspired by! Other mentions would have to be Paula temple and Clouds which for me, is also big favourites!

Anton
I usually know if I like a track within 2 seconds of listening to it, and that’s part of the reason why I find music so fascinating. Taking it back to my early influences of Boys Noize, one of the producers that heavily changed my direction to the faster and harder styles was Regis. I remember how his track ”Speak to me” just had me drop everything and stare the first time I heard it. It still gets me.

Regis
Speak To Me

I love melodies. So anyone that manages to combine a clever, colourful and unpredictable melody with a powerful, explosive kick-drum, whether it’s labelled as hard style or gabber, techno or trance, they have my attention. With that said, two tracks that I have to mention here are ”Blacknecks – To the cosmos lets go” and ”Knightvision – Knight of visions”.

Blacknecks
To The Cosmos, Let’s Go

Your Implosion EP is fantastic! It also features remixes from some Jaded favourites. How did this come about?

The whole EP was supposed to be on another label at first, but the owner of that label wanted us to change our names because he didn’t like our previous releases. Being pretty new and this being a big label we said yes to this at first but as things started to go better for us we thought it was a stupid move to change our name right as things started to move in a good direction. We had to make a cancelation and was stuck with four originals and no place to release it. Luckily just at the time our good friend Emile (one of the owners of Wrongnotes) had asked us for an EP so it made sense to release it there! About the remixers, we dreamed big and made a list of people we wanted to ask. They all said yes so there was no real struggle there which is so cool for us since every name on the remix duty are pretty much our biggest idols and inspirations haha!!

What gear do you use in your live & production set-ups?

Our productions are a big mixture of gear and plugins. Anton has a Xoxbox, SH101, Doepfer Dark Energy and some other synths that all go through a Sherman Filterbank that we use to create leads, basslines and atmospheres with. This combined with a good selection of vst synths and effects plugins really is the essence of our sound. However right now for playing our tracks out we only dj because we have not figured out a good way to play live yet.

We have a new EP coming out soon on Blvckplvgue and some other tracks coming out that are a little secret right now. We want to finish everything we started and then take some time to focus on our own label Hard Tune Network where we have at least three new singles planned. Hopefully we will do this combined with some more cool gigs like this one ;-) Other than that we will just take things as they come, and if a project sounds interesting enough we will jump right on it!

Oscar and Anton will unleash their 3 hour UK debut set from midday this Sunday, backed by the forces of Raymundo Rodriguez and Warden in Room 1, and Ells101, Reformed Society, Traynor, and Soaper b2b Philip Genev over in Room 2. Grab £10 tickets here or jump on our guest list and pay on the door.